Fallout 4 is one of the best action games for the Playstation 4, Today we are talking about fallout 4 companions guide, You know Xbox One and Windows versions. Those who love it might be interested to know the different companions in the Fallout 4 series. You might be familiar with the dog Dogmeat who is best friend of player.

There are few other great companions but player may have one companion at a time. Player can also initiate romance with few of the companions. Isn’t it interesting? So here let’s read in detail about each companion of the Fallout 4 game and enjoy bethesda best product. 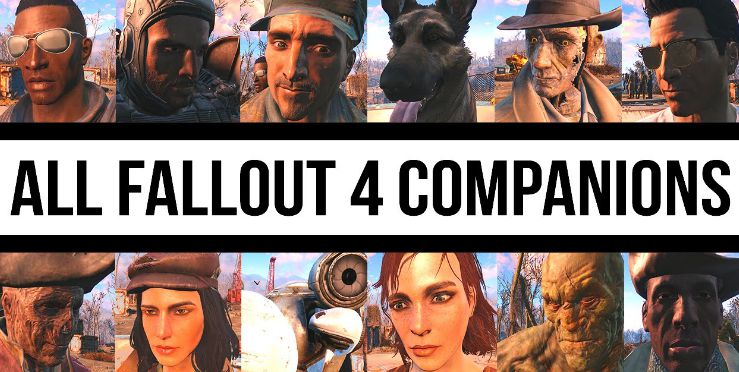 Let us start with the name of the first companion in the game John Hancock whom the player can ask for the completing The Big Dig. He is one of the important partners in the game with his judgement skills.

He takes serious betrayal of the enemies and proved to be the best judgemental companions. He can be located at the streets of Goodneighbor.

Hancock is even the best dressed citizens of The Commonwealth. He uses his mind calmly and does not behave aggressively in a situation. His decisions and ideas help you enjoy his company in the game.

He likes when player donates the item and grab the gems. The perk associated with it is Isodoped which fills up the Criticals bar 20 percent faster in the region of radiation. Player required having maximum affinity with the companion.

You might have seen many detectives in video games but none of them skilled like Nick Valentine. He has a revolver and very skilled companion in the game.  His initial location comes at the Vault 114 when you will complete Unlikely Valentine quest. He do not like peaceful decisions and even hate you if eating corpses, stealing and murder to any non-hostiles. His story is featured into the Fallout’s gameplay which is very interesting and worth.

There are the dozens of quest are in the row. He likes you when hack the computer, donate items and heal Dogmeat. Now coming to the companion perk, it allows 50 percent faster terminal cooldown and grants one extra hacking guess when Close to Metal.

The player will have to look for the Long Time Coming quest completion and affinity to the Nick Valentine. The companion is one of the best plotted detectives with best storyline in the Fallout gameplay. 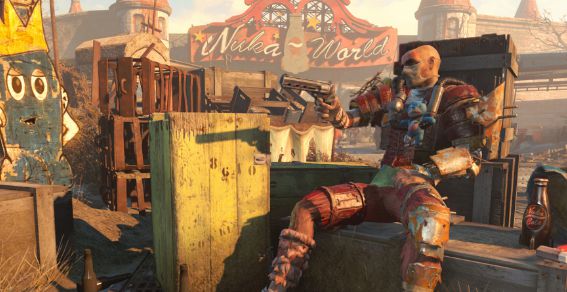 The companion can be located in the Sanctuary Hills, outside of your farmhouse and it is the best plot for you to understand. The Out of Time quest should be fulfilled after visiting Concord. It is very faithful and his contribution is to the high level. One cannot deny the wielding his saw blade in melee battles.

Player may face a dilemma in the beginning between then companion Dogmeat and Codsworth. But you can choose after the initial hours. The companion is very generous and kind and he likes when player modifies the weapons, heal Dogmeat and donate items.

The acts of selfishness may disappoint you and do not like when you kill non-hostiles, use chemicals and any sort of stealing. It is packed with the 10+ damage resistance against robot energy weapons. The player needs maximum affinity to the companion.

If the player wants his order to get followed then Maccready is capable to perform it. He is very good at taking orders and he is pro at sniper. The companion Maccready’s initial location is The Third Rail bar in Goodneighbor. He also has his access to the long-range rifles in the game. You can unlock a side quest and know his backstory too as the bonding gets stronger. If there is a violent decision then he approves it.

He likes when you steal something but disapproves kind behavior. He also dislikes when you donate items and murder non-hostiles. The chem. Addiction is also not favorable. The companion perk includes the killshot, VATS headshot accuracy by 20 percent. The completion of the Long Road Ahead quest should be completed and also required maximum affinity with MacCready. He is one of the good companions with some different priorities and plans.

Now the super mutant is here you can partner up with. The mutant can be located at the Trinity Tower and the player can ask him after join Curtain Call. He is a very extremely powerful fighter and can damage in seconds. He has his skills with the giant missile launcher at the scene. You can make strong bond with him as he is acts of kindness. The Curtain Call side quest should be completed for the open doors to the companion. He acts violently but quite kind and generous.

He likes murder and cannibalization. He dislikes the selfish acts and power armor vertibirds. His choice of weapon is Assault rifles and melee. He also dislikes picking locks. The perk Berserk grants 20% melee weapon damage at low health survival. The player requires maximum affinity to the Strong.

She is the tough companion as bit of temper. Cait is Irish pit fighter who likes to have a partner. She is drug addict and former raider around Scrounger. The chances are quite high to initiate a romance with this companion lady. She favors the destructive behavior as Cait tackled under demons. Cait can be recruited at the Combat Zone in the theater district of Greater Boston.

She likes act of violence and destruction but does not mean that she is set in it. She likes walk around in the nude and stealing. She dislikes the act of kindness and generosity. Even she doesn’t want to maintain the peace. She also dislikes when you donate gems or items in the game.

The personal trainer in the Fallout 4 game companion is an ranged fighter and Institute-allied Synth. The player can find X6-88 at The Institute. The task is to join the Institute and complete Mankind – Redefined quest. He cannot make the long range vision which is one of the lacks in its personality. He is handy with the energy weaponry and can be impressed by the best technologies The Commonwealth.

The perk Shield Harmonics allows the +20 energy resistance. He likes peace and selfishness. He also like when player hacks computers, power armor and modify weapons. He dislikes the kind of generosity and kindness. He don’t like heal dogmeat. The player needs maximum affinity to the X6-88. The player can locate him at the Institute after conclusion of Mankind Redefined.

She is one of the active companions handy with a pistol. She is actually a reporter in the Diamond City. The aggressive character likes when player picking locks of unclaimed property. She also approves mean behavior and generosity. You can recruit the gal at the after completing Story of the Century in the city of Diamond. She can be a good combat and you can also initial a romance with this fighter.

Pistol is the weapon of choice with this companion. She is a good combatant who dislikes the violent decision. She also hates eating corpses and murder non-hostiles. Its companion pack consists of the Gift Of Gab which doubles the XP during speech challenges. Player can navigate to the new locations with the help of it. It requires the maximum affinity to the Piper.

You can say that she is just the female version of the Codsworth. She is a modified Mr. Handy which includes personality of the mix of scientists. She spends her life into the hidden section of Vault 81. She can be a science and medical specialist. The best thing is that the player can flirt with this robot. She can be located in the scene at the conclusion of Hole in the Wall. Her choice of weapon is the Flamethrower.

You can gain the 100 HP if your health falls below 10% once in a 24 hour time period. She likes when you heal dogmeat, peaceful outcome decisions and when you donate items. She don’t like on murdering non-hostiles and chem addiction. The minimum condition of the completion of the Emergent Behavior quest is required.

He is one of the most important characters in the Fallout 4 game. It will be to mention Preston as the companion. He is the de facto leader of the Minutemen which protects innocents. You can also initiate a romance with the Preston. He can allow the player access to ton of quests and expand settlements throughout The Commonwealth. The fiction character can be found in the in the Museum of Freedom during the When Freedom Calls quest.

If you need an active partner, then Preston is the good choice. It is easy to impress him with the new settlements and trade routes. He likes when you eat corpses, donate items and steal. He also favors peace and generosity. He dislikes violence against the non-hostiles and using chemical weaponry. His affinity perk United We Stand allows the 20 percent extra damage and resistance which number of opponents is three or more. Preston is equipped with the Laser Musket in his hands.

He is the railroad fiction character and a liar who is your biggest fans. He is a very skilled infiltrator and hacker. Deacon can be located at the Old North Church and can be easily impressed by the donating items. He likes healing dogmeat, hacking computers and picking locks.  Rifle is his weapon of choice.

He dislikes chem addiction, violence and murder acts. He is one of the best field agents who can give up his life for yours. The sunglass with his personality makes him fine with all situations. The affinity perk Cloak & Dagger allows the 20 percent more sneak attack damage. The perk also increases Stealth Boy duration by 40 percent and requires maximum affinity to the Deacon.

He is the first commanding officer who would join you like Preston Garvey. He is very loyal to the player to The Brotherhood. Danse is the part of the Brotherhood of Steel. He is a very powerful fighter and you can initiate romance with Danse. He is equipped with the Laser Rifle and can be located in the game at the Cambridge Police Station.

He likes when you use power armor and modify the weapons. He dislikes chem use, murder, stealing and peaceful acts. The Know Your Enemy perk will allow player to 20 percent more damage against Feral Ghouls and Synths. Danse also likes the choice of violent outcomes.

This is one of the best friends in the Fallout game to you. The best companion who is at your affinity to the maximum level. The dog has powerful search capabilities and can easily locate you the hidden items at different places. Dogmeat likes when players pat on the head. He likes following at the various locations.

Dogmeat unlikes the might cats. You can locate the Dogmeat at the Red Rocket Truck Stop just south of Sanctuary. The little buddy will also help you to deal with different companions in the game.

So, here our list ends about the Fallout 4 companions. You can find different companions in the game at the locations mentioned. The list will help you to know the different characters and companion of the Fallout 4. It should be noted that some companions can lose essential status when dismissed.

The affinity can be gained by the actions that are loved by the companions or vice-versa. So, here are the dozens of the companions in the Fallout 4 game. We hope that you enjoyed knowing about them. If you have any query related to the Fallout 4 companion then let us know through you comments here.