This post will show you where to find strong fallout 4 because it is really interesting for game lovers like console commands and cheats. So if are looking for fallout 4 strong likes and dislikes then you are landing prefect webpage.  Strong, he is a super mutant who is in the fallout 4 who enjoys a lot reading the Shakespeare. he can be enlisted as a companion.

The unusual strength and flexibility of him makes strong a marvellous affiliate in the field of battle. This article is a perfect guide to show you where strong can be found, his perks and abilities and will tell the ways of increasing his attention towards you.

Strong a super mutant situated in the trinity tower which is a bit to the east of the diamond city. He is clenched as a prisoner in a cell at the top of the tower. As soon as you reach a bit closer to the trinity tower you will start to get the radio signal of the trinity tower. When you modulate into it you will be getting the quest called the curtain call.

How can you get strong?

You must finish the curtain call quest in which you will be climbing the trinity tower and also fighting against some super mutants. When you will reach the floor called penultimate level you will have to fight against a mini boss named fist if you defeat fist after that you must find a man in one cage.

After you finish to talk to rex as well as strong you shall go the terrace which is on the top and take over the trinity tower cell key from the chest. As soon as you let them out you must hide in some place and allow them to fight. After you come out without them noticing you. Now you shall talk to rex. after the end of your discussion you can recruit strong.

Abilities and perks of strong

He is forearmed with one huge hammer and the other thing is he doesn’t wear any Armor. He gets started with one short pipe rifle. But the thing is that he hasn’t got boundless fuel for that. You will be able to plunder a group of the super mutants from the trinity tower and furnish him with it. He is crazy when he is below 25% of the health, the damage of his melee weapon increases by 20%. 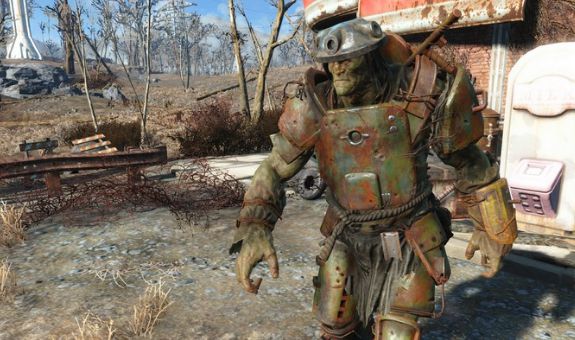 How can you increase the relationship level with strong?

Strong’s recent goal in his life is looking for the compassion or also the milk of the human kindness because he always calls it. He is a super mutant who cannot be romanced. If you act in a compassionate manner against others then it will definitely score you some points. Strong hates morally corrupt acts like stealing, picking locks and many more. But he doesn’t have any thing to do with, against plundering dead bodies.

Rex is a super mutant who must be rescued at the trinity tower. As you will be trying to rescue rex you must fifth against almost 15 super mutants. And for that you will be needing a nice technique and that is you should first hit the super mutant with a Molotov cocktail and then use VATS for picking them off which will take .308 fuel.

At the top of the tour you will be rescuing rex the one who made the distress call and also his friend strong. He is an extremely friendly super mutant. But he looks as scary and dangerous as any super mutant. When you will be getting down from the trinity tower through a makeshift lift and again you must kill a group of super mutants before you recruit them.

You can strengthen your relationship with strong by eating corpses and also by killing the non-antagonistic. Strong also hates Entering Power Armor, Entering Vert birds, Healing Dogmeat, Picking Locks, Speech Success. So, take care that you don’t do these things in the Strong’s presence.

This burly fellow strong seems so aggressive on the exterior. Strong is really a surprisingly sensitive super mutant as told earlier he is a great lover of William Shakespeare’s plays. Strong is an expert in using huge weapons like missile launcher and many more.

If the melee weapons and old guns are your style then you must ask strong to badge along. Strong is very strong and he will surely smash all your enemies and will leave you free so you can do any thing you want in the fallout 4. Strong can be described as the more irritated version of hulk.

Strengths and weaknesses of strong

Strengths: strong has a lot of strength he can also carry a rocket launcher at his back from you by the immoderate force and can also cover the rows of enemies with rocket fires.

Weaknesses: the weakness of strong is his large body. in the hectic combat situations strong can block your way and cause inconvenience also in the narrowest corridors strong takes a very large place and it is partly in the line of fire. Finally thanks for visit fallout4 website, If you need any more like Scavenging then explore our blog.